The power of electricity

Most people underestimate the power of electricity. They think they are in complete control of electricity and if they get an electrical shock, they can pull away and avoid getting hurt. On the other hand, electricity causes almost fifty percent of all accidental house fires in the UK. That’s more than 20000 fires per year. Roughly 70 people are killed and 350.000 suffer serious injuries as a result of electrical accidents in the home each year. Jack wants to make sure that Lucy is aware of the dangers of electricity and its lethal effects or the serious accidents that can happen.

Jack: Do you know, Lucy, that almost all accidents take place because of human distraction? This is particularly dangerous when electricity is involved. Nowadays the average home has a lot more electrical appliances than when I was young.

Lucy: Oh yes, that’s true. Apart from the usual kitchen and bathroom appliances, we have a total of 3 TVs at home, a DVD player, a games console, my mom has a microwave and everybody has a computer, of course.

Jack: Well, it seems that this is what modern living is all about.

Lucy: But come on, Uncle Jack, a minor electrical shock can’t be that dangerous. Haven’t we all experienced this?

Jack: You definitely shouldn’t risk anything. Electricity moves at the speed of light, so pulling away from the circuit, for example, is impossible.

Lucy: What happens to the human body in the event of a bad electrical shock?

Jack: Your muscles immediately tighten up and contract so that you are locked into the electrical circuit. You’ll lose consciousness because you can’t breathe properly, as the lung and chest muscles will constrict. The heartbeat is interrupted and the blood vessels tighten. Moreover, you’ll suffer burns where the electricity enters and leaves the body. Your body can be partially or totally paralyzed. But you mustn’t touch the person under any circumstances because the electrical shock can travel through to you and use you as another pathway to the ground.

Lucy: Oh no, how terrible. But what would I do in such a situation?

Jack: First you must separate the person form the source of electricity as fast as possible by turning off the supply, i.e. by unplugging the appliance, for example, or by turning the mains off at the fuse box. If you can’t do this, you should try to remove the source of electricity from the person. But be careful, don’t touch him or her. Use a piece of insulating material like some wood instead. After that you should call 911 right away.

Lucy: Now I understand why you should only have competent people carry out some electrical installation work, for example.

Jack: Absolutely correct! It’s not so difficult to make an electrical circuit work, but making it work safely is far more difficult. This requires certain skills and experience that only a registered electrician has. Accidents big or small, avoid them all!

Lucy: I know where the fuse box is in our house in Germany so that I can turn the electricity off in an emergency. But where is yours?

Jack: The fuse box in this house is over there in the corridor. This is where all the electricity is controlled and distributed. It contains three things – the main switch, fuses or circuit breakers, sometimes both, as well as RCDs.

Lucy: Oh, what are RCDs?

Jack: RCDs are residual current devices. But let’s start from the beginning. First of all, the main switch. It is used to turn off the electricity supply. Then we have fuses, mostly in older houses which automatically disconnect the circuit when something goes wrong. For example, when the current becomes more than is safe. Then due to the rise in temperature, the fuse wire melts and breaks, thus breaking the circuit. The circuit breaker serves the same purpose, that is, it breaks the circuit when the fault occurs. They’re mostly found in newer houses. The breaker lever is reset to the ON position and a blown fuse is replaced. You should, however, first find out why this happened in order to avoid it in the future. And now, last but not least, the RCD. It also immediately switches off the electrical current flow when it detects current leakage to earth at a harmful level when you use electrical equipment. It can prevent you from getting a fatal electrical shock if you touch a bare wire, for example. It also protects against electrical fires to a certain extent.

Lucy: All right, Uncle Jack, this has been a lot of theory so far. Can we talk about any practical examples now? What can we do to avoid all these accidents?

Jack: Well, first of all an electrician should check the condition of cables, switches and sockets used in a house. Faulty and old wirings can be very dangerous. I told you all about our new colour system for wires in the UK. So, whenever you come across cables which are coated in black rubber, lead or fabric, you can tell that they’re very old. They should be replaced. This also includes old fuse boxes with a wooden back, round pin sockets and round light switches and many more things. You wouldn’t believe what I’ve seen over the years. It’s like with so many things in life, electricity is only a blessing when you use it safely.

Lucy: So, what is one of the most common hazards nowadays?

Jack: Well, among you young people that’s in many cases the overloading of sockets or the use of damaged equipment. Plugs and sockets should be checked for burn marks, crackling sounds or if they feel too hot, cause blowing fuses or tripping circuit-breakers. When removing a plug from a socket, do it very carefully. When you pull it out by the cable, it puts a strain on it which could damage the contact between the plug and the socket. This in turn could lead to the overheating of the plug or loosening of the wires and if the earth wire is disconnected, to an electric shock.

Lucy: Do you have anything like standardized plugs so that you know they’re good quality?

Jack: You should only use plugs with the British Standard safety mark because they have live and neutral pins with insulating sleeves which can be put in and pulled out of the socket safely. But nevertheless, check them regularly and replace damaged cables right away.

Lucy: What about drying clothes on an electric heater?

Jack: This is extremely dangerous, especially when water is dripping onto live parts. It could cause an electric shock or even fire. Many heaters have ventilation slots to prevent overheating. But if you cover up these slots, the heater could overheat and catch fire.

Lucy: What I’m always afraid of is when someone drills or fixes a nail in a wall.

Jack: That’s a good point, because you never know what’s behind the wall. There are often electrical cables and gas or water pipes in walls. Another dangerous thing today is the excessive use of extension leads and adaptors. In the past four sockets per room were enough. Now that so many more are needed for computers and game consoles etc., people mostly think that this quick and easy solution is also safe. But when they’re misused, these leads and adaptors can be a real danger. They can also overheat and cause a fire.

Lucy: To be honest, I also have that in my room at home.

Jack: Well, the best solution would definitely be to install extra sockets. Anyway, you mustn’t use cheap substandard adaptors or plug one into the other. Moreover, don’t overload adaptors, especially with high-current appliances like for example kettles, irons or heaters.

Lucy: But what about lamps, radios and computers? Their cables are often pretty short, particularly when you want to move these things every now and then. We simply don’t have so many wall sockets in our house.

Jack: Well, there are cases, of course, when you can’t avoid using extension cables if you can’t reach the wall socket with the equipment cable. But keep in mind that extension leads shouldn’t be too long. You can trip or fall over taut, over-stretched cable. It should always be positioned carefully to prevent any damage. But trailing it under the carpet instead to avoid tripping or falling is also dangerous, of course. If it has to cross a pathway, it must be covered with a rubber protector strip. However, leads can be easily damaged when they’re walked over or always bent at the same point or stored in the wrong way. When leads on power tools become tangled, one of the conductors might fail one day, which is dangerous, too. So always check that leads, plugs and sockets remain undamaged. Replace any damaged extension leads and get rid of them. Don’t try to repair them by sticky tape. That isn’t enough because it’s not strong enough and won’t protect you from getting an electric shock.

Lucy: So many dangers around the home. It’s almost frightening to hear about all the accidents that could happen.

Jack: Yes, of course, and we haven’t even talked about the kitchen and the bathroom. Because there the mixture of hot surfaces, water, flexible cables and electricity can be highly dangerous. The incorrect use of cooking appliances including microwaves is one main reason for accidental house fires.

Lucy: Okay, Uncle Jack, but I’ve heard enough of potential hazards around the home for today. Let’s save the rest for another day.

Jack: Just one last thing before I let you go because you ladies always need so much time in the bathroom. The bathroom is the most dangerous room in a house from an electrical safety point of view. Wet skin reduces the body’s resistance. Therefore the consequences of an electric shock are much more serious. But again, with a registered electrician who knows about the special requirements for electrical installations in bathrooms, you’re always on the safe side when you are also aware of the potential hazards. Never use electrical equipment in wet conditions.

When we use the German word ‘lassen’, it can have different meanings: zulassen, veranlassen etc. In English you have to use different verbs for this. They are called causative verbs (Verursachende Verben/Kausalverben). Causative verbs are verbs that cause something else to happen (bewirken, dass etwas passiert; etwas geschehen lassen; jemanden veranlassen, etwas zu tun). In English these are:

Grammatical structure: Let + person/thing + verb (in the infinitive without »to« – Grundform).

»Let« is an irregular verb! The forms are ‘let, let, let’. (all identical)

Allow and permit (erlauben) are used in more formal situations. But they are used with ’to + infinitive’.

Make = force someone to do something he doesn’t want to do (jemanden zwingen, etwas zu tun).

Force and require (zwingen) are used with to + infinitive.

Have = give someone else the responsibility to do something (veranlassen, dass jemand etwas tut).

Grammatical structure: a) Have + person + verb (in the infinitive), to talk about the person who is/was asked to do this.

Get = give someone else the responsibility to do something (Same meaning like ‘have’ but less formal.).

Grammatical structure: Get + thing + past participle

Help = assist someone in doing something.

So much for this year. I wish you all a Merry Christmas and a happy and healthy New Year. We will continue with our technical English also in 2019. So, I hope all of you will stay tuned!

Technisches Englisch (39)
The Complexity of Wires 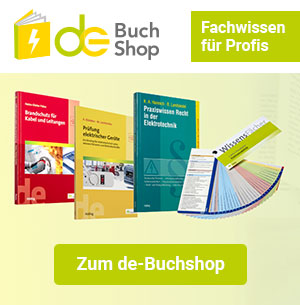